Solitary Pancreatic Metastasis from Renal Cell Carcinoma: A Case Report from India with a Review of Literature

Metastatic cancer to the pancreas accounts for less than 2% of all pancreatic malignancies, with renal cell carcinoma being the predominant type. We report the case of an elderly patient detected with a solitary lesion in the head of the pancreas, 6 years after a nephrectomy for renal cell carcinoma. The patient underwent a pancreaticoduodenectomy for the same. A review of literature showed isolated pancreatic metastasis to be rare, ranging from 0.5 to 3%. Patients are usually asymptomatic, unless the tumor enlarges. Spread usually takes place by the hematogenous route or via lymphatics, direct spread being very unusual. Surgical resection seems to be the standard of care for isolated metastasis from renal cell carcinoma as the other modalities of treatment seem unresponsive. Typically, patients undergo a pancreaticoduodenectomy or distal pancreatectomy depending on the location of the tumor. Atypical resections are done in certain situations. Surgery is carried out in favourable candidates and a thorough evaluation needs to be done intraoperatively for multiple metastases. Histology revealed a metastatic renal cell carcinoma confirmed on immunohistochemistry. All margins were free of tumor without lymphnodal involvement. Eight months after the surgery the patient is doing well. As compared to primary pancreatic cancer, metastasis from renal cell carcinoma has a higher resectability rate. Solitary metastasis to the pancreas has a good prognosis especially in renal cell carcinoma, with a 5 years survival rate of 43 to 88%.

Metastasis to the pancreas is usually associated with extensive disease and a dismal prognosis. Resection is recommended only in cases of isolated metastasis. Eighty percent of resections reported for metastasis to the pancreas result from four primary cancer types: renal cell carcinoma, colorectal carcinoma, sarcoma and melanoma1,2. Pancreatic metastasis from renal cell carcinoma presents synchronously with wide spread metastatic disease in 12% of cases and therefore surgical resection may not be favorable2,3. However, the overall 5 year survival for a solitary metastasis in the pancreas treated with resection ranges between 43 and 88 %1-4. 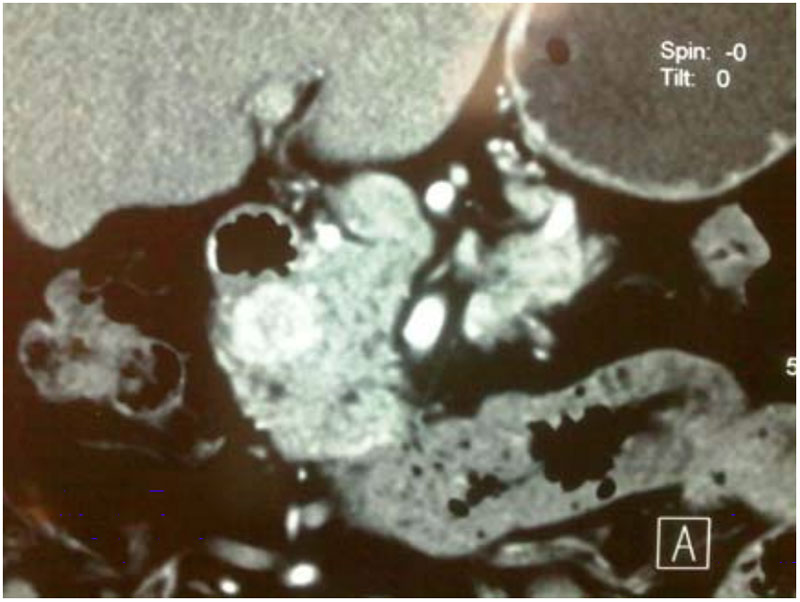 Figure 1: CECT image of an isolated, brightly enhancing mass in the head of pancreas

A 70 year old gentleman underwent a right radical nephrectomy for renal cell carcinoma 6 years ago. The 9×8 cm tumor was present in the upper pole of the right kidney. The tumor was classified as grade II in the Furham’s nuclear grading system. There was no capsular or vascular involvement and the ureter and hilar lymph nodes were free of tumor. However, the tumor also involved the calyx. Contrast enhanced computed tomography (CECT) of abdomen revealed no metastasis and patient was staged as T3aN0M0. Post operatively the patient has been on regular follow-up with 6 monthly blood investigations, CECT abdomen and X-ray chest.

Eight months back he reported with vague abdominal pain with loss of weight and appetite. Ultrasonography of abdomen showed a lesion in the head of the pancreas. Biochemical investigations were within normal limits. Preoperative carbohydrate antigen (CA) 19-9 level was normal. Endoscopic ultrasonography (EUS) revealed a mass in the head of pancreas and fine needle aspiration (FNA) showed a clear cell tumor suggestive of renal cell carcinoma. CECT abdomen (Figure 1) revealed a mass in the head of pancreas of size 3x3 cm without any common bile duct dilatation. A classical pancreaticoduodenectomy was performed. Intraoperatively, there was a 3x3 cm lesion in the pancreatic head without any regional lymphadenopathy. Postoperative course was uneventful and the patient was discharged after 7 days.

A final diagnosis of metastatic clear cell renal cell carcinoma in the head of the pancreas was reached. The surgical margins were free of tumor. No lymph nodal (LN) metastasis was detected. Patient has remained well till his last follow-up.

The pancreas is a rare site of solitary metastasis but it is often involved in diffuse metastatic disease. For all sites included, synchronous metastases from RCC occur in 25-30% and metachronous metastases in about 40% of patients5 . The incidence of metastases from primary renal cell carcinoma to pancreas ranges from 0.5 to 3%2-4, lung being the most common5 . Metastasis often presents many years after a nephrectomy2- 5

A case of this nature has been previously reported from India on one occasion6 . In a review of

literature in 236 cases of isolated pancreatic metastasis of RCC, Sellner et al3 reported 35% of these patients to be asymptomatic with others presenting with symptoms of abdominal pain (20%), GI bleeding (20%), obstructive jaundice (9%), weight loss (9%) and pancreatitis and diabetes (3%) each. The patients are usually asymptomatic. Usually, the symptoms arise when the tumor increases in size. The median tumor diameter in the asymptomatic subgroup was reported to be 25mm (range: 14 - 48mm) as compared to 45mm in symptomatic group4 .

The mode of spread can either be hematogenous or via lymphatics with direct spread to the pancreas being unusual. Spread through lymphatics may occur by retrograde lymph flow secondary to tumor infiltration of the retroperitoneal lymph nodes. Haematogenous spread may occur along the collateral vein of a hyper vascular renal tumor with or without associated renal vein thrombosis7 .

Surgical resection of primary renal cell carcinoma and metastatic deposits remains the most effective treatment since the chemotherapy, radiotherapy and hormonal therapy have proven ineffective2,8. A solitary resectable metastasis of an RCC or multiple metastases confined to one organ are the suitable surgical candidates5 . Resection involves a standard pancreaticoduodenectomy or a distal pancreatectomy, majority of the times, but a median or extended pancreatectomy may be carried out if indicated depending upon the location of secondary deposit with or without resection of the inferior vena cava (IVC) when the IVC is involved by the metastatic tumor5, 9.

Atypical resection such as duodenum preserving pancreatic head resection, median pancreatectomy and enucleation of the tumor has been adopted on the basis of the fact that these lesions are well encapsulated. A relatively good prognosis has been observed in the absence of spread to lymph nodes and in local recurrence2,4. Bassi et al4 , adopting a policy of atypical resection, observed a 29% rate of pancreatic recurrence (5 out of 17 cases). 22.3% of patients show widespread disease at surgery for suspected isolated RCC metastasis to the pancreas and 17.1% develop extra-pancreatic recurrence after resection5 .

However, others feel that, since the frequency of multiple metastasis is often more than 2 (average 3.2), the choice of a standard or an atypical procedure is then probably less important than a careful search for multiple metastasis2 . Pancreatic metastases intraoperatively are detected by a combination of complete pancreatic mobilisation, careful manual palpation and intraoperative ultrasonography. Multifocal pancreatic metastasis

has been reported to be in the range of 20-45%2- 4. Zerbi et al2 reported an increase in multifocality from 17.4% to 34.8% on pathological examination of resected specimens.

Surgical treatment of isolated pancreatic metastasis from neoplasms other than renal cell carcinoma carries a poor prognosis as they signal the onset of disseminated metastatic disease3 . The outcome of isolated pancreatic metastasis from renal cell carcinoma is clearly superior with a mean 5 year survival ranging from 43 to 88% which is even better than that of primary adenocarcinoma of pancreas2, 3

Tanis et al5 , systematically reviewed more than 400 patients with pancreatic metastases from RCC. Factors associated with favorable prognosis include a long disease-free interval, preferably more than 2 years, after resection of primary tumor, a single, asymptomatic, metastatic deposit with central necrosis and complete excision of the secondary deposit with histologically negative margins in a candidate fit to undergo pancreatic surgery. Previous surgeries to excise isolated metastasis at extra pancreatic sites should not be an exclusion criterion5, 7

The overall 24 and 60 month survival probabilites are reported to be 0.84 and 0.53, respectively, in patients who underwent resection4 . Corresponding values of survival probability at 24 and 60 months in patients treated conservatively were 0.53 and 0.26, and the difference between the two groups was significant (p=0.040)4 . Reddy et al1 noted that, the 5 year survival rate was 80% from the time of the pancreatic metastatectomy in seven out of eleven studies whereas Tanis et al, noted that the 2 and 5 year disease free survival rates after resection of pancreatic RCC metastases were 76% and 57%5 . The overall survival rates were 80.6% and 72.6% respectively5 .

Immunoreactive cytokines used for metastatic renal cell carcinoma earlier are now being replaced by systemic agents, such as bevacizumab, sunitinib, temsirolimus and sorafenib which have shown promising results in phase III trials10. Sorafenib prolonged progression free survival in patients with advanced renal cell carcinoma11. However, treatment is associated with toxic effects including diarrhea, rash, fatigue, head and foot skin reaction and occasionally hypertension and cardiac events11. In the presence of extra pancreatic recurrence, improved survival rates have been achieved (5 year survival rate of 88%) by combination of pancreatic resection and use of immunotherapy2 . Also, in cases showing an aggressive growth pattern i.e. a

short disease free interval from the primary RCC or a short interval between sequentially resected metastases, a probable recommendation is to start on systemic therapy and restage after a couple of months5 , surgery being considered in patients in remission or with stable disease. Systemic therapy may also be considered in cases of extra pancreatic disease at exploration or as a neoadjuvant therapy in locally unresectable disease5 .